I didn’t go to sleep until 2am this morning and slept until 7. We have to leave by 7:30 for me to be to work on time.

I’m late. I’m one whole hour late because I stopped in Walmart and didn’t want to go to work.

I got to work. I tried to focus on work but I really couldn’t concentrate so around and around I went on the same problem that usually would take minutes for me to solve.

We go home after a doctors visit so that I can continue working. I fall asleep at my computer and I awake only to not be able to concentrate.

I finally turn the laptop off at 5pm only to lay on the couch and try my best to disappear. I let Mason watch tv, clutter the living room, and make as much noise as he wants as long as he doesn’t bother me.

He’s just a kid. Why do I have to yell? I haven’t yelled in a long time. I think I’m going back to that place again. Why can’t I just go home? I hate my job. I hate responsibilities for holding me hostage here. I want to go home. I want my mom. I need help. Why do I have to bear this burden? Why can’t I just be free and happy? I’m going to ruin him. I’m not a good mother because I yell. I shouldn’t let him watch so much tv.

These are just the thoughts that went through my head in a few minutes. Round and around I go just allowing the negativity to engulf me.

This is what a day of depression looks like. This is what a weekend of bipolar looks like. Maybe it’s just what borderline personality disorder looks like. At this point, idek. I’ll be glad when we figure it out. So I can get the help I need and/or medicine that works.

I just haven’t had a day like this in awhile and y’all I’m tired. 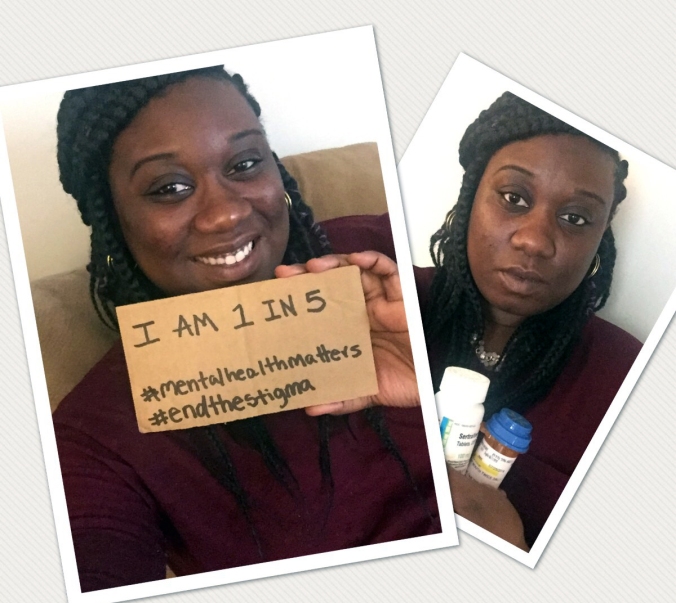 1 in 5 adults experience mental illness in any year and 1 in 7 mothers experience a mood disorder after having a baby. Disorders such as depression, anxiety, OCD, and PTSD. There’s so much stigma around mental health and I’m here to do my part to break the stigma.

So many times, I get the “You don’t look depressed”, “You don’t have bipolar” (the jury’s still out on this one), “It’s just a moment. It’ll pass”, “I got myself out of depression without medicine.” (Depression is diagnosed by observing persistent depressed moods over a period of time. Not two weeks, not one month. At least a year.) I just listened to people because I used to think the same thing until I realized that something wasn’t quite right with me. This came to realization in my last relationship. I was always moody, lashing out, or didn’t want to do anything. Life was very unpleasant.

It actually started before then. The whole month of December in 2012, the tears wouldn’t stop. Everyday, I was crying and I can’t even tell you why. 6 months after having Mason (2015), I went to an appointment and to check for post-partum depression, the doctor asked a series of questions. I said no to every question that I should’ve answered yes. Shame and guilt had silenced me into not seeking help.

The more we keep things to ourselves, the less likely that we’ll reach out for help. Your secrets can literally keep you sick. The same year, I went and saw a weight-loss therapist because I knew how my emotions connected with food was not correct either. He wasn’t any help. He couldn’t see that it was deeper than emotional eating. It was depression or more like bipolar 2 (manic depression) in which the jury is still out on the correct diagnosis.

When I finally sought out my last therapist, I knew that I was where I was supposed to be. After 4 months, my therapist asked me to consider getting medication to lift my mood. We couldn’t make progress in my work if I never felt like doing anything. Session after session, I constantly cried. Now I can go and it’s often that I don’t shed a tear. Does that mean I’m better? No, it means that progress has been made.

In March of 2016, I got prescribed my first anti-depressant. I was still in silence about what was going on with me to my loved ones because I felt like it was my fault. I felt like if I prayed more and read my bible more than I wouldn’t be dealing with this. People were voicing their opinion on social media that medication was the devil and that it hurt more so than it helped. I haphazardly took the pills. After seeing no effect, I asked to be switched to something else. February 2018, I reached out to a psychiatrist and started taking my meds seriously because I actually couldn’t say they didn’t work if I didn’t try. Lo and behold, I started having less and less crying spells. I was less irritable. It seemed as if I was a little less compulsive (symptom of bipolar). I could see the light at the end of the tunnel.

This is part of my truth and I am sharing it because we can’t afford to sit in silence one second longer. Someone out there is going through and feeling all alone. Mental health is already hard enough to seek help for and then add in guilt, shame, and embarrassment and it’s nearly impossible to do so.

“Vulnerability is what connects us as humans and sometimes it means talking about hard things and mental health is hard to talk about, but it is also so freeing when you do.” – Desiree Fortin